A silly satanic troll from the Hoaxtead Research satanic community called Sheva Burton; has been forced to admit she targeted the wrong Matt Taylor.

At war with the Hoaxtead Research satanic hordes, Matt Taylor, the premier writer in Brighton, set to flee to Hollywood, to pitch the film trilogy of King Arthur II – The True Story.

About as intelligent as those who throw rocks at the windows of podiatrists; silly satanic troll Sheva Burton admitted that:

“My bad, I just checked and I think you are right.”

“My bad, I just checked and I think you are right.”

Oblivious to the fear, alarm and distress her satanic trolling had inflicted upon her victim; satanic Sheva Burton brushes off her evil torment, with the black magic spell, “My bad.”

Read for yourself what the real Matt Taylor says about the satanic Hoaxtead trolls: 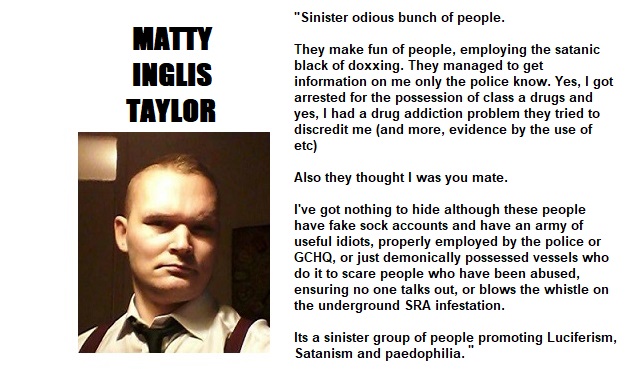 They make fun of people, employing the satanic black of doxxing. They managed to get information on me only the police know. Yes, I got arrested for the possession of class a drugs and yes, I had a drug addiction problem they tried to discredit me (and more, evidence by the use of etc)

Also they thought I was you mate.

I’ve got nothing to hide although these people have fake sock accounts and have an army of useful idiots, properly employed by the police or GCHQ, or just demonically possessed vessels who do it to scare people who have been abused, ensuring no one talks out, or blows the whistle on the underground SRA infestation.

Its a sinister group of people promoting Luciferism, Satanism and paedophilia.

Not only has Sheva admitted she’s mistaken, but PRAISE BE TO GOD; she’s sorry too!

“Please remove the posts as it’s not fair on him. Sorry.”

The Sirens off Brighton’s Palace Pier; A Special Report by MrX

Sheva Burton exposed as a ‘M.I-Thick-as-Shit’ Agent, has been threatening the other Matt Taylor; (called Mr.X by the Sun Newspaper and otherwise too dangerous to be named in public.)

Sheva Burton is a ‘M.I-Thick-as-Shit’ Agent

Here she threatens me with further arrest; while at the same time admitting the arrests she orchestrated through-out 2017-2018 were a ‘waste of resources.’

This is confirmed by the real Matt Taylor, when he said, “They managed to get information on me only the police know. Yes, I got arrested for the possession of class a drugs and yes, I had a drug addiction problem they tried to discredit me (and more, evidence by the use of etc)”

“I’m sure you will re meet some police officers again soon and I’m sure they will be happy to give you some advice about real investigating……… maybe when you probably end up behind bars, you could spend your time studying?”

As I wrote in my most recent blog:

This is before or after a second abusive assault against my person: 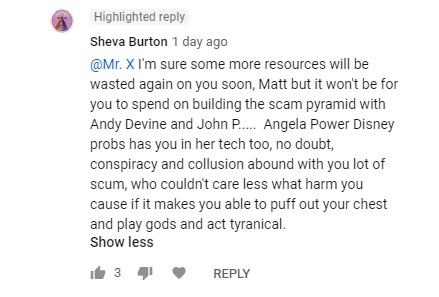 “@Mr.X I’m sure some more resources will be wasted again on you soon.”