On the morning of the New Zealand mass shooting massacre at the Al Noor mosque in Christchurch; I published a Facebook update indicating that it looked like a false flag event. 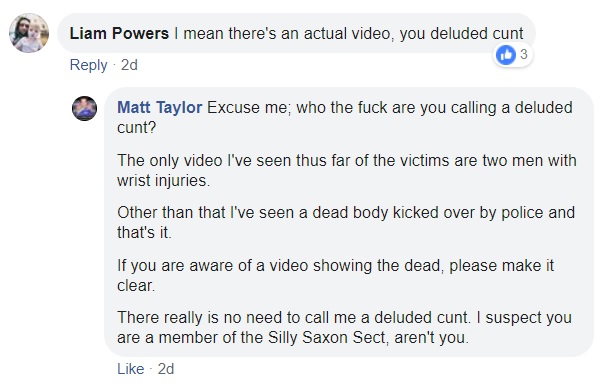 Up until this point the only news footage being shown was of a police officer running to a colleague and pointing. Furthermore, the only footage of the dead and injured was of a young man on a stretcher, who appeared unharmed, other than a strained wrist, and a more older man with his shirt off, being directed to a wheel chair, who himself, appeared unharmed, but holding his wrist in pain.

It was due to a lack of visual evidence of a mass slaughter, killing 49 people and injuring a further 20, that I called the shooting into question.

“I mean there’s an actual video, you deluded cunt.”

Having watched the video, startling anomalies arise, which call into question, the validity of this terrorist attack. 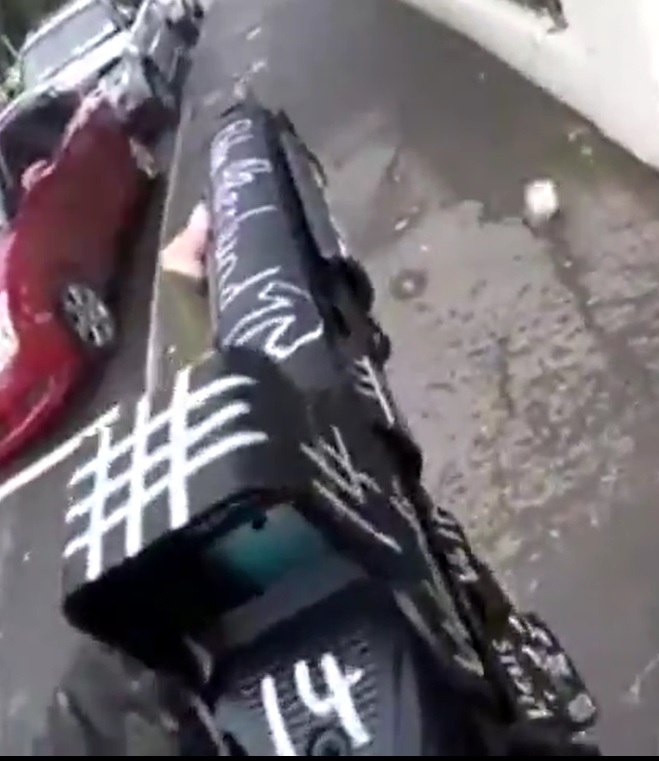 The point I’m making, straight-off, having watched the footage, is that people were already dead and piled up, before Brenton Tarrant entered the room and started shooting.

Now how the hell did that happen?

Next up is the lack of blood spray, whenever Tarrant shot at his victims at close range. 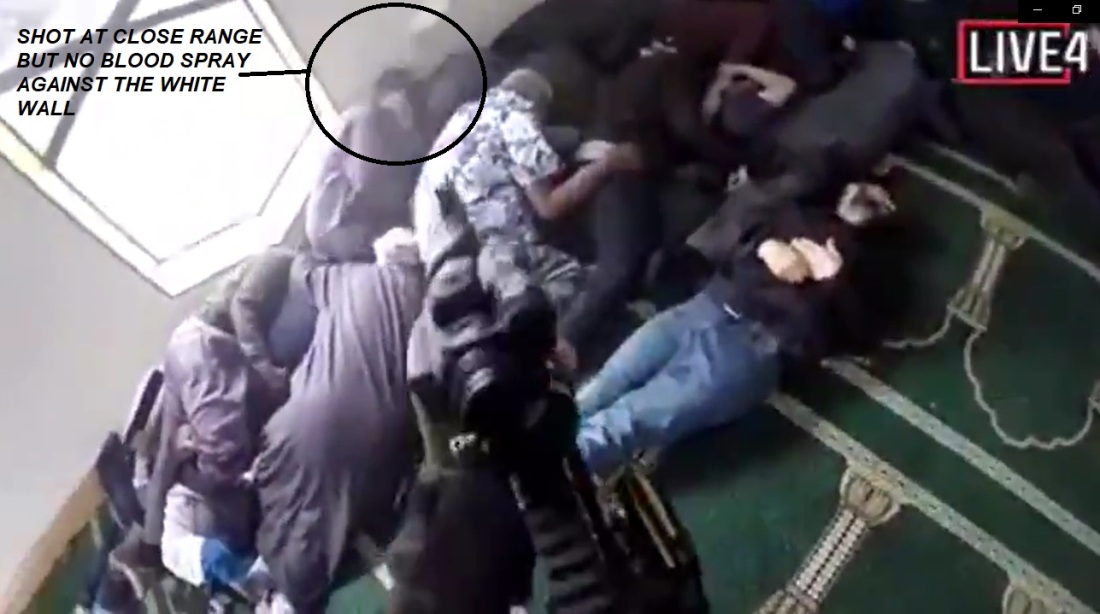 With a pile of dead bodies, having just been shot, you would have expected a very large puddle of blood to have formed at this stage.

No puddle of blood is visible, as isn’t any blood spray, when victims are shot at close range.

The walls of the room are bright white and no where is blood visible on the walls.

The picture above is a screen shot 11 minutes and 22 seconds into the footage. The head cap of a victim is seen flying of the person’s head, but no blood spray visible against the white washed wall.

This is seen again throughout the footage, in which bodies leaning up against the wall are shot, but no blood spray being visible. 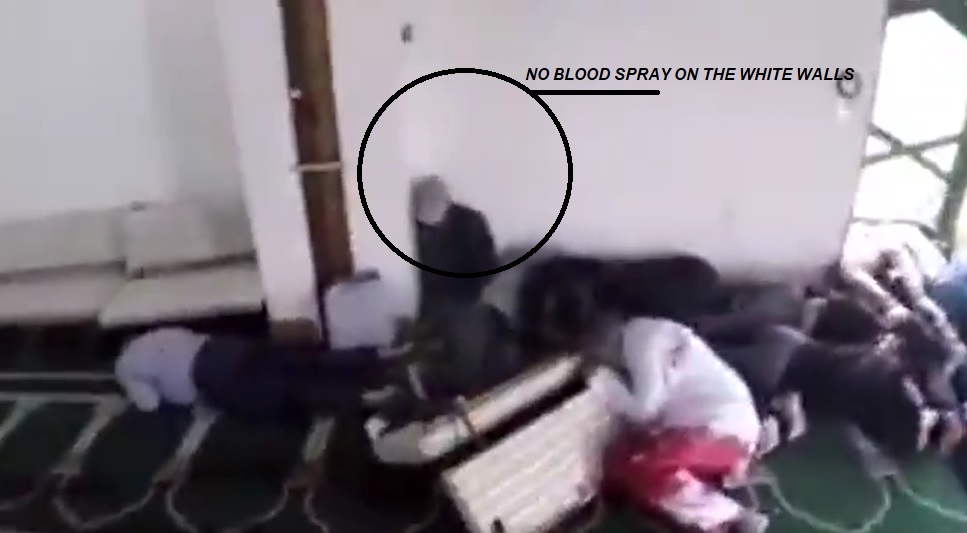 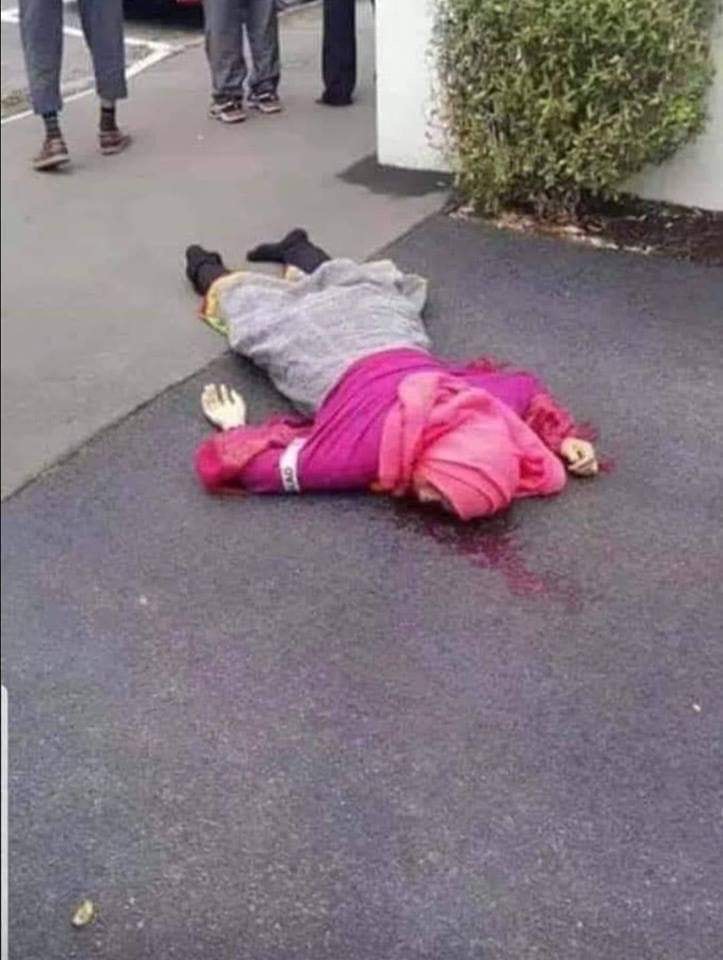 Is this a dummy laying on the floor? The hands certainly make you think it is.

Carrying on with the theme of the lack of blood spray; this is seen again, with Tarrant’s last victim at the La Noor Mosque shooting. 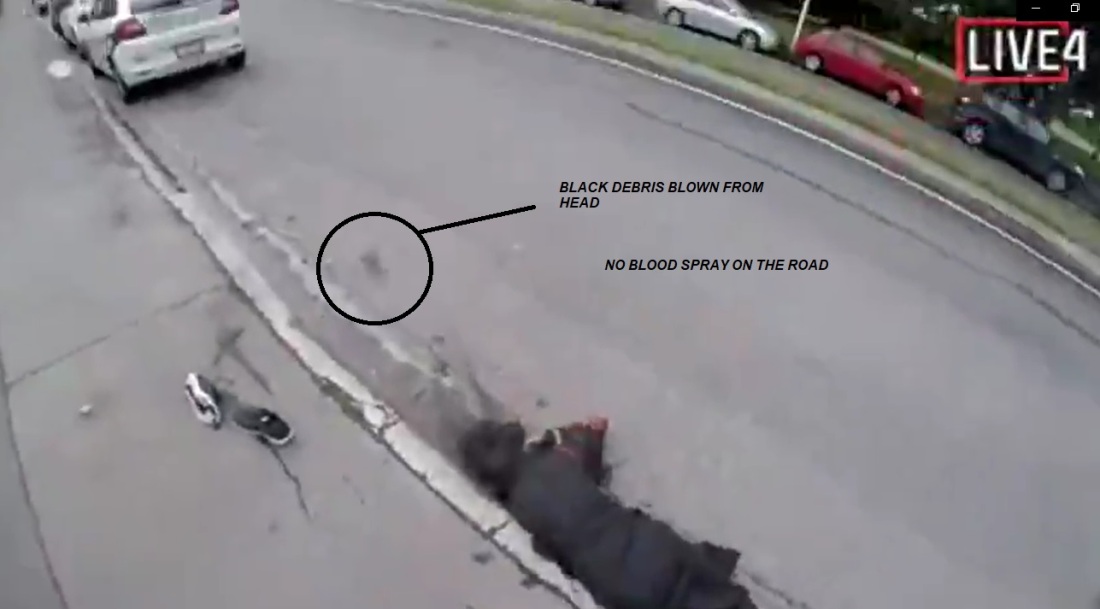 This lady was first shot at while outside, finding protection from the La Noor Mosque perimeter fence. At 11 minutes 46 seconds, Tarrant shoot at her, and at 12 minutes into the footage, we can hear her pleading for help while lying in the gutter.

At 12 minutes, 2 seconds, Tarrant took one last look at the mosque, walked up to the lady pleading for help, and shot her point blank range in the head.

While black material is seen flying from her head, no blood spray or brain matter is seen. Something you would have expected from such a close range shot. 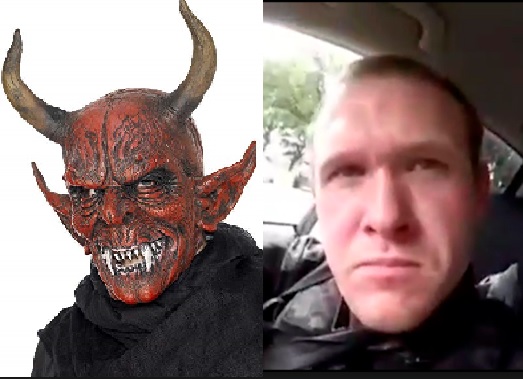 Information you’ll only hear on Guerrilla Democracy News; Matty Inglis Taylor reveals the disturbing development that there are thousands of these fascist occult sleeper super soldier in Europe, Ukraine and Russia.

Its called the ‘Satanic Black Awakening.” 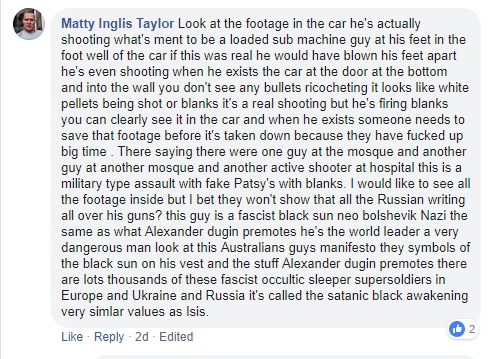 We have seen these Satanic Super-Soldiers before, as the picture below shows. Matty Inglis Taylor is right, they are satanic genetically modified giant super-soldiers of the Satanic Black Awakening. 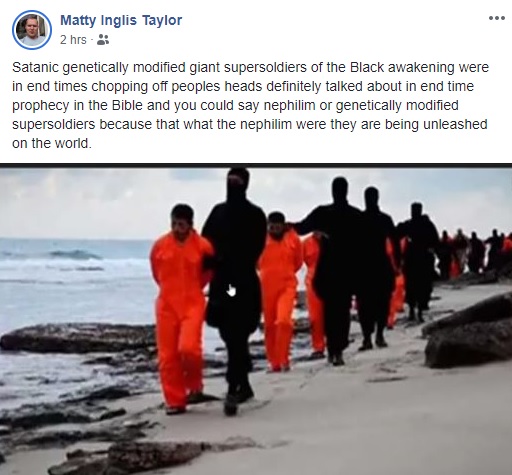 Last but not least, we see a dead victim of the La Noor mosque massacre, actually texting on his mobile phone. 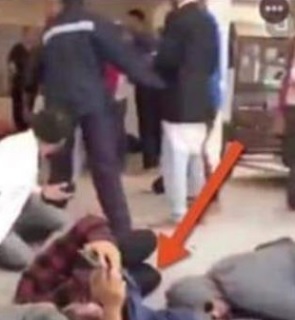 We expect Christopher D Spivey to join in with the debate, and no doubt he’ll too come to the conclusion that the New Zealand mass slaughter shooting is a false flag event too.

After all, he’s the only journalist in the world, claiming that the Shoreham Airshow crash was a false flag event. 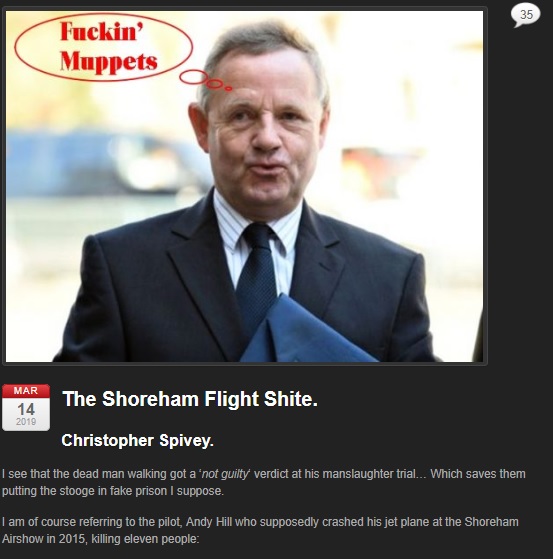 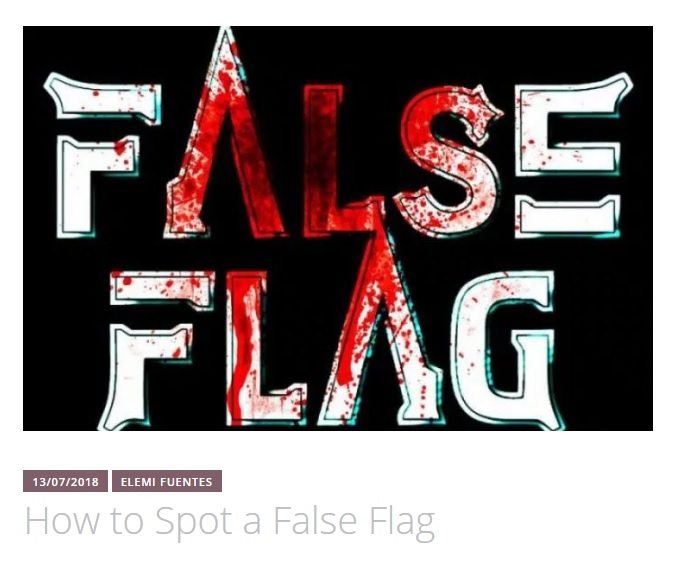 HOW TO SPOT A FALSE FLAG 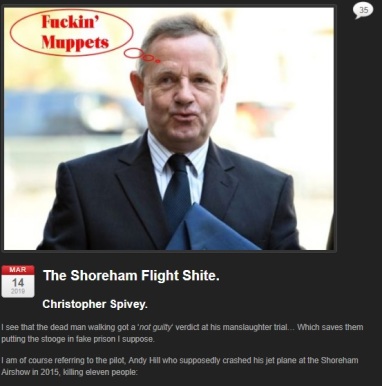 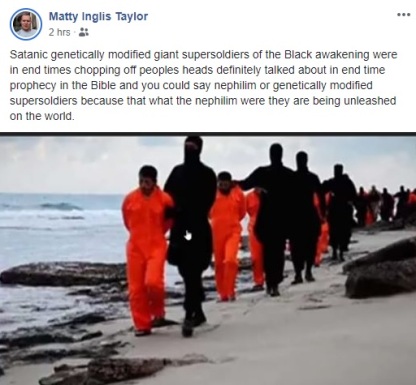 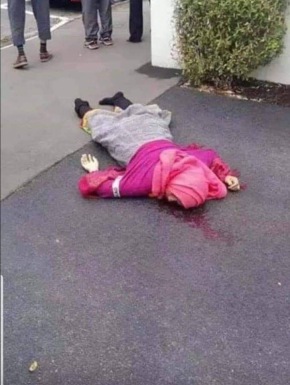 Is this a dummy? 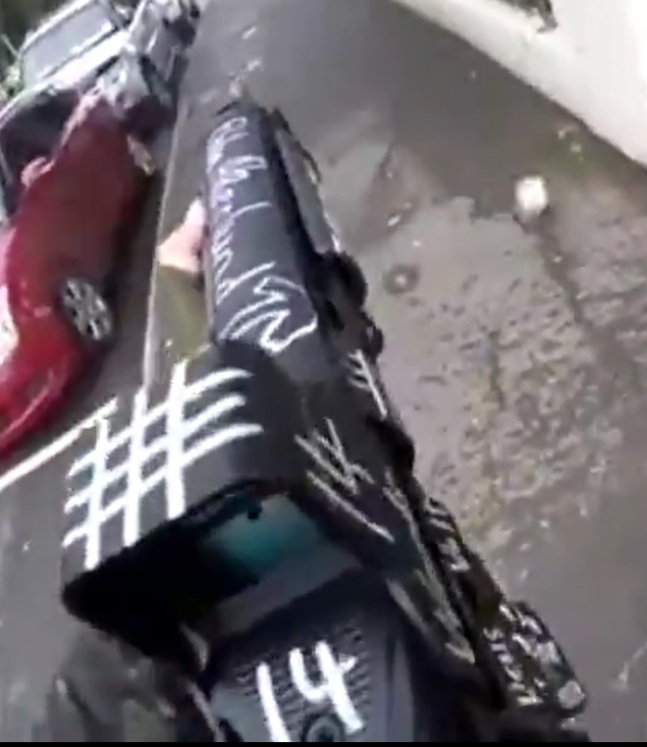 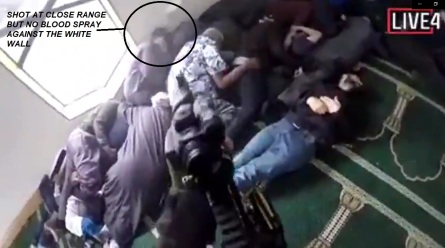 where is the blood spray? 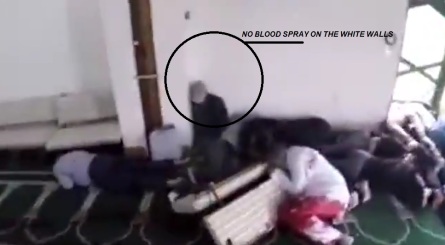 Run for your Lives 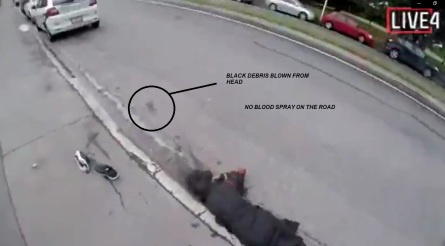 Run to the hills 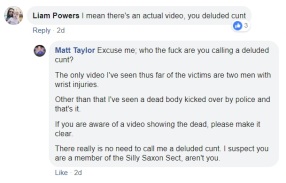 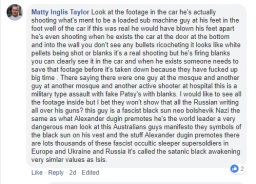 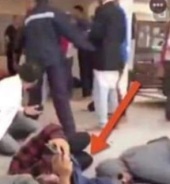