Comment: I invite you to Linwood Islamic Centre to meet Elliott, the man you accuse, if you dare, oh, and I invite you to meet me too, I look forward to your coming out of you comfortable setting into the real world and see that we do not live in a soap opera, but a world full of beautiful people, so come on, what are you waiting for? Or are you a keyboard coward?

As you can imagine, (remembering the events of Christchurch), the anguish of all Christians across the world this Easter weekend, (following the barbaric terrorist bombings in Sri Lanka, and the desecration of The Notre Dame in France, displaying their satanic contempt to Allah, by ensuring even the aliens on the moon could see the upside crucifixion burning from the surface of the Earth); has been truly terrible and shocking.

As an ex Royal Military policeman, (trained to conduct criminal investigations), I will relish the opportunity to travel to New Zealand, and prove to my satisfaction that Elliot Marshall Dawson, is not the killer at the Linwood Islamic Centre.

I am thrilled to come out of my comfortable setting into the real world, and humble ask both Allah and the Islamic community in New Zealand to crown-fund the necessary amount to fly me to New Zealand and provide the resources to conduct a serious criminal investigations.

The world is full of beautiful people and anyone who denies me this opportunity are ugly and undeserving of Allah’s grace and mercy.

For example, take what Asa Graves had to say in response to my serious allegation that Elliot Dawson is the real killer at the Linwood Islamic centre.

“Is he frustrated that he has to use twizzlers for his micro penis.”

REALLY! Is this the best the friends of EMD from New Zealand can produce; small dick jokes?

Even Elliot’s own response was cowardly.

“Can anyone in u.k report this to the authority even if through fb etc. The guy I think is brittish an a lowlife scum.”

Rather than coming to me directly; you, EMD and the whole Islamic community in New Zealand have gone running to MI6 complaining that I’ve accused sweet innocent Elliot Marshall Dawson (EMD) of being a satanic super soldier.

Well done you keyboard cowards, you managed to take down my Youtube channel, where hundreds of others have tried and failed.

Even though Voldemort aka (sounds like Sickly Semen) likes to claim credit. 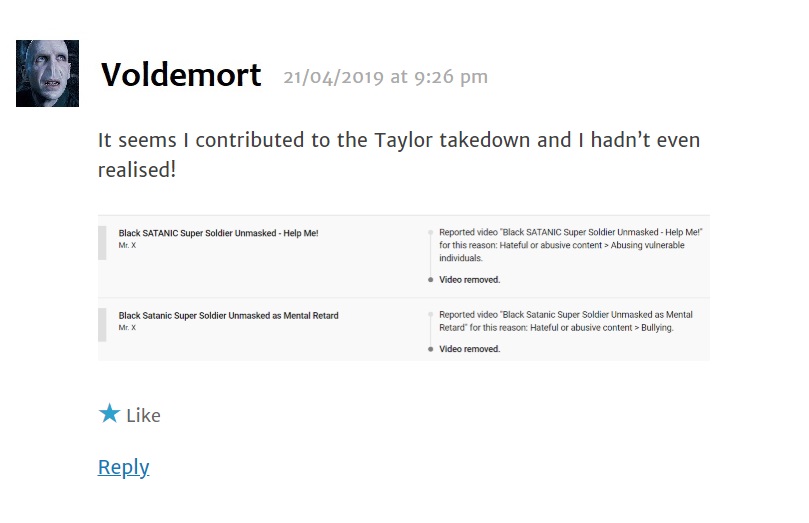 Where was Elliot when Prince William visited Christchurch over Easter?

As an ex-royal military policeman, with experience of criminal investigations and spotting crime, I doubted EMD’s claim of hiding in the bathroom of the Linwood Islamic centre as soon as I heard it.

And wasn’t it such a co-incidence that I should be EMD’s Facebook friend, having never previously met him?

What is wrong with New Zealand that I can’t even speak my opinion, in danger of my Youtube platform being shut down.

My youtube channel showed over 500 videos, with over 1500 subscribers and has been publishing since 2014.

How dare you get my youtube channel taken down. Damn you all. The actions of EMD, ASA Grave, youtube and MI6 agents working in conjunction with the NZ government; is clearly actions of a coward, with secrets to hide.

I would sincerely welcome your kind invitation to Christchurch, to meet yourself and Elliot Dawson. I would dearly wish for this and urge the Islamic community in New Zealand to crowd-fund the amount to cover the trip’s expenses and a serious investigation, into whether Elliot Dawson was the real Linwood killer?

I am heartbroken that my Youtube platform has been shut down as a result of this, and will do everything in my power to prove I had serious grounds to accuse Elliot Dawson of being a killer at the Linwood Islamic centre, and get my youtube channel re-instated.

I stand by my contention and vehemently defend the thought process and journey, which my conclusion was founded upon.

It was the NZ government that originally sounded the alarm bells by attacking anyone from sharing the live streaming shooting at the Al Noor mosque.

Don’t shoot the messenger; by the footage of Al Noor was soon dismissed as fake.

Don’t start trolling me just because the Al Noor video was forensically examined frame by frame, and was proved to be littered with inconsistencies.

No wonder the NZ government were so keen to lock anyone up caught watching or sharing it for 14 years?

I have a history of conducting criminal investigations. It’s not rocket science. There is a framework that needs to be followed. Questions asked, evidence sought and conclusions noted.

Then of-course we have ex CIA operative Robert Steele, claiming its a false flag event

And then another CIA operative, David Rock confessing to have orchestrated the Christchurch shooting on the orders of John Podesta and Hillary Clinton.

It would appear the NZ government wants all critical thought shutdown and banned.

New Zealand is the New World’s Order leading light of Example. What is happening in New Zealand and Australia today, is the glimpse of the things to come, to the rest of us by tomorrow.

I stand by my contention that Elliot Dawson is not a reliable witness and that his testimony shouldn’t be believed.

I would dearly love to come to Christchurch to conduct my own investigation and to meet Elliot Dawson in person.

I pray to Allah and the Islamic community in New Zealand to make it happen.

Following on from the testimony of ex-CIA spy Robert David Steele, who claims the New Zealand Christchurch mass slaughter shooting was a false flag event; another CIA whistle-blower has broken radio silence to link both Hillary Clinton, and her election campaign manager, John Podesta, with New Zealand’s worst mass killing.

“Okay I’m gonna whistle blow. I orchestrated the Christchurch shooting. I orchestrated it under authority from Hillary Clinton, John Podesta and other DNC people.
I am David Anthony Rock, I’m a CIA deep state agent. I thought I was doing good for people. I thought I was doing good for Humanity but I’ve come to realize that; [sigh] no, Hillary Clinton is a liar, Podesta is a liar.
The orders come from much higher. Obama and going back, there’s some real deep horrible shit going on and I was caught up in the middle of it and I apologize.
I was a big part of the Christchurch shooting that’s why I’m and Christchurch that’s why man US citizen, that’s why I’m under CIA.
That is why that must answer many questions and before in it this video will get cut off.
I know how the media works, we run the media.
Hear this full video. All of the evidence is in the hidden server emails. You will never get the full truth unless you get all of the hidden emails from the Hillary Clinton server.
Some of that…
Obama fuck you.
Podesta, fuck you.
Hillary Clinton, fuck you.
IOC, all you muppets and puppets, similar doing, you Burch fuck, fuck you too.
You are the ones that really did this. I was just a puppet in the fucking story; research that shit I already gave you my name, David Anthony Rock, born 27 of the 6th, 77 in Connecticut, grew up in New Zealand.
Let anything that’s classified be unclassified about me, I give full and complete control to the public, to see all my records.
Please do, and if you don’t push to see my full records, you’re a fool for Humanity’s sake.
Amen God bless, I’m a Christian now….”

Is Elliot Dawson a Reliable Witness or a Mental Retard?

At least 20 kindergarten children in the US to be killed – for real – in a New False Flag Event Coming Soon.